The letter below was received from Father Hieu and translated to English. Footnotes at the bottom were added for clarity.

When we met Ky, she was holding a two-year-old child in one hand and had the other arm around her older child who was sitting in her lap. It was after an afternoon rain and everything in Kon Tum was wet. Ky’s tent sat idly in the wind.

We were on our way to visit some patients and other poor people in Kon Tum. It is in the rainy season and the road we were on at the foot of the mountain was muddy, heightening our awareness to the poor conditions in the area. While traveling down the road we stopped at a roadside tent, made with four small wooden bars covering a 2-meter-wide bamboo bed frame. On the bedframe lay a mat, where a young woman and her two young children were sitting.

Although we have never met, Ky knows who we are. My group often visits her village to help the poor and sick. We normally travel with a list of people we need to visit, but we often meet new people and welcome them without appointments. We are easy to recognize because after we visit a village many of the people will talk about us. Ky had seen us before but never asked for our help.

Ky has the deep features of a mountain woman, but we know she is rather young. I asked her why they were sitting here, and she said, “this is where we have been living”. While we were talking Ky’s husband Que came from between the cassava1 fields. He was very polite. After talking for a while, we stitched together the patchwork of their life from the details the husband and wife told us. They have two children and are homeless. Que is 24 years old and Ky is 21 years old. The couple used to live in their parents’ houses and worked cutting weeds in the cassava fields in the area until recently when a whirlwind swept off the roof of the house they were living in. Although the roof was only a broken corrugated metal sheet, it had provided some structural stability to the house. Without it, the house became very fragile after the storm and was no longer able to stand.

With a wife, two children, and no property; Que decided to stay at the cassava field. Their home is now the tent in front of us. They had been trying to save up money to build a house to protect them from the rain and sun, but since they had to leave their old home to live on their own, they realize how hard it can be. Their two children were wrinkled, and the money they earned from farming was just enough to cover their meals. They rent a small piece of land to farm and live paycheck to paycheck, but after working the field for so long without being able to save much, they gradually gave up and quit dreaming about building a house.

I often observe the poverty of a family through their kitchen; the items they have in their kitchen can best describe the family background. Even if you have a shabby house, you will strive for a cozy kitchen. The poorest of the poor may have soup with bamboo shoots with salt2, or rice paddies3, or left-over fried noodles to save for the next meal; the house can even seem empty. With the Que and Ky, I do not have this opportunity; they have no kitchen. Their breakfast was probably cooked through tangerines in a makeshift kitchen somewhere in the vacant land near their tent. I asked them what their children ate. Ky calmly said “the kids do not drink milk. There is no milk to drink nor porridge4 to eat. After they were six months old they ate rice with their parents, eating whatever they can.”

I decided to build a house for Ky’s family after asking for some additional information about the household. They can try to improve the food for their children, but children need to have a place to find shelter from the sun and rain. I talked to some donors who support similar charitable activities, and they quickly agreed to help. The very next day, the land next to Ky’s tent became a construction zone. The house is 30 square meters (325 square feet), solidly built but without stucco5 to optimize the 38 million VND ($1,600 USD) donated to create a stable place to live.

Ten days later, the house was complete. I once again returned to visit them. Ky was radiant and confused, as was her husband. Before entering the house, I could hear Ky say to her husband “Thank you donors.” They then carried their children into the house together. We asked God to let the home help nurture the family and to bless the home.

I want to repeat the words of Ky: “Thank you donors.” This rainy season, the house is not only a peaceful place to live, but also a place to save young bodies that are at a higher risk of deadly pneumonia caused by the sharp cold after each monsoon rain. 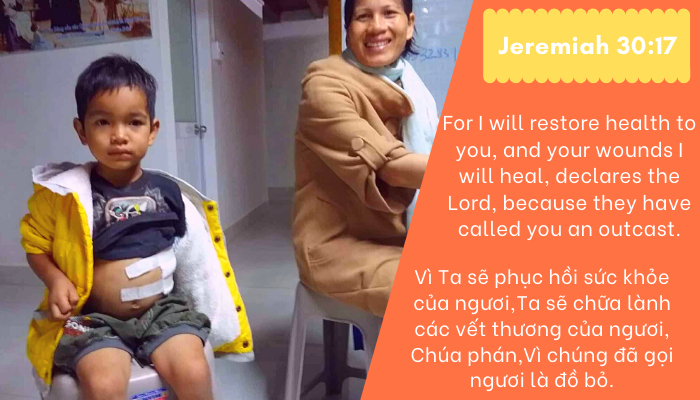 I had previously written a post talking about a child we met with a broken rib. Father Hieu recently sent us the following letter giving more detail. We met Thục in the family’s front yard. He was Read more… 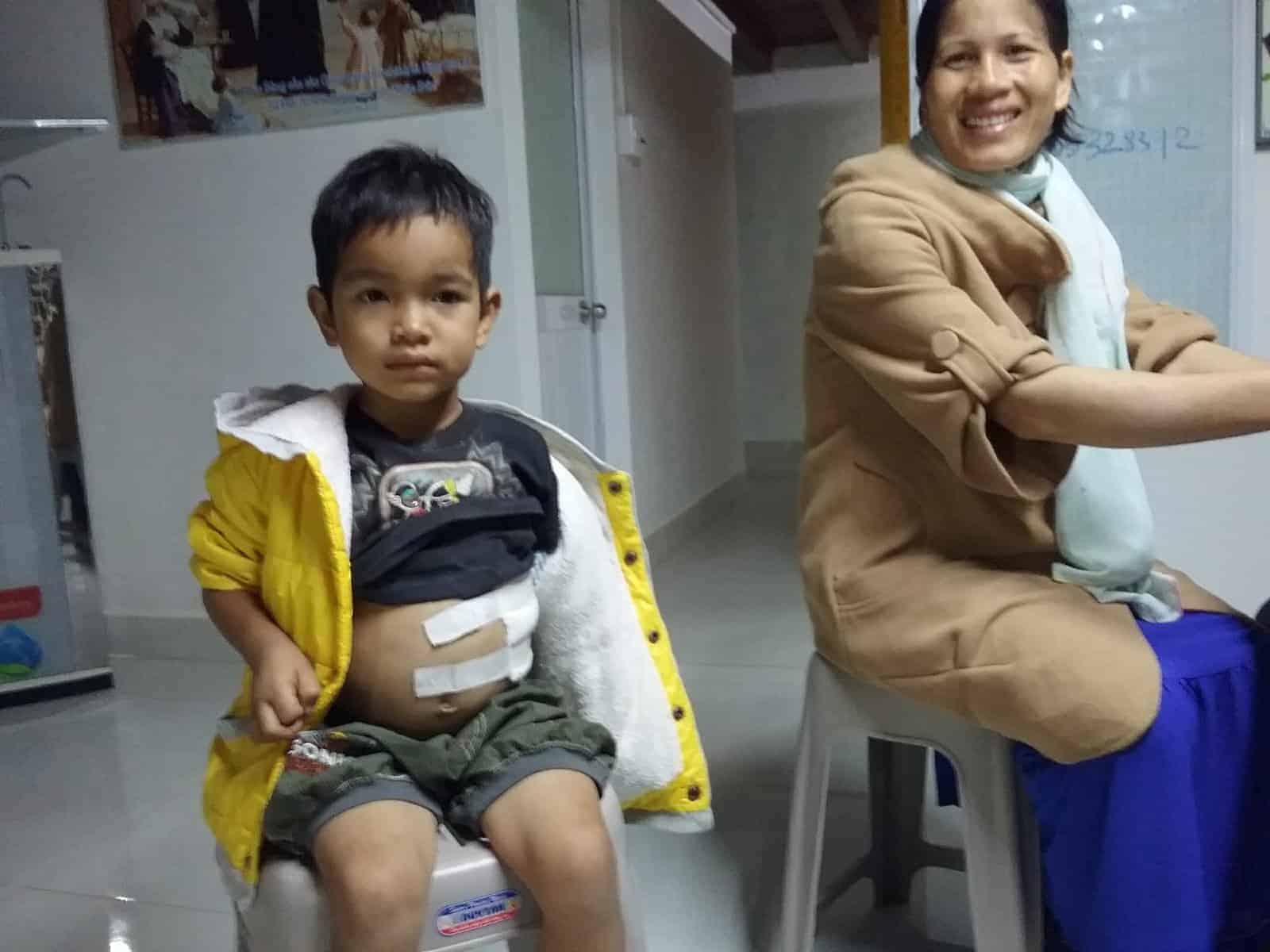 On our last mission trip in January, we were walking around a small village and visited a family with a boy who is a very good student. The family doesn’t have enough money to pay Read more… 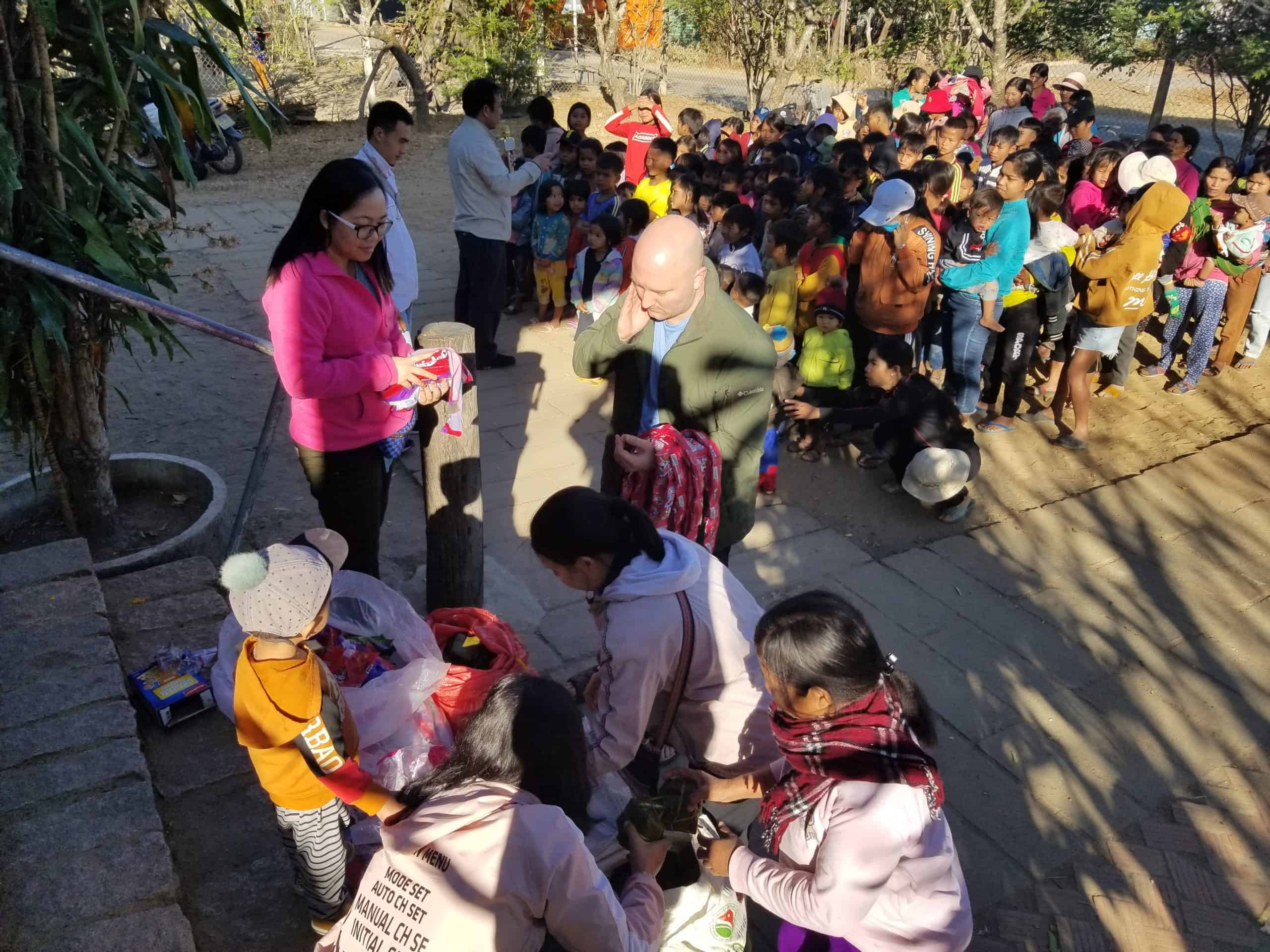